Another month has passed and I don’t know where it went. Yes, September was a short month, but I spent most of it focusing on Initiate of Stone and Apprentice of Wind, working long hand, in my journal and on scrap paper, so none of it was spreadsheet-worthy. 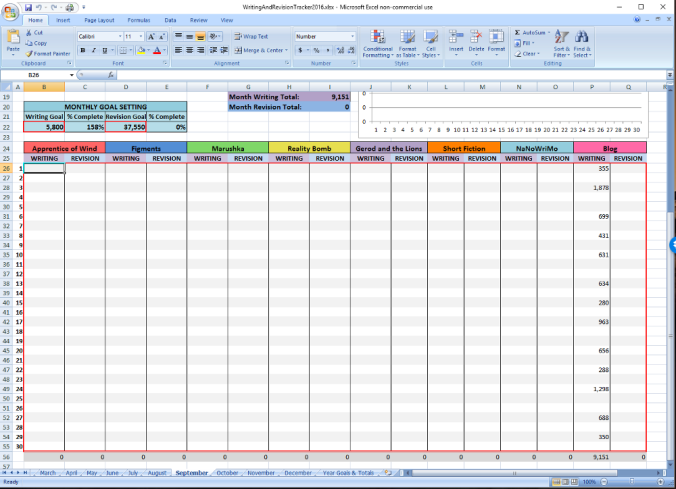 Surprisingly, even with two months of no revision, I’m still at 96% of my revision goal for the year. Yeah, I was kind of a beast January through July 🙂

This is to say that I’m making great progress, fine tuning my epic fantasy series. This month, if I finish a second round of revisions on AoW (which means I will be able to show some actual revision progress on my Writing and Revision Tracker*), I have some solid planning in place for the third novel in the series, which has a new working title—Wavedancer.

I should be well-placed to rock NaNoWriMo 2016. I must temper expectations by letting you know that I’ll once more be out of town, training, for the first few days of November (1st through 4th), and, I’ll be participating in Wordstock Sudbury 2016 ** the weekend following, November 5th.

I can’t guarantee a “win” this year, but, as I’ve said in the past, any words I write in the month of November are words that didn’t exist before. It’ll be a win, for me, regardless. I already expected to be drafting into December, in any case, because, epic 🙂

Querying has been temporarily suspended while I rework the first chapter, query letter, and synopsis for IoS.

Something that’s been very helpful is K.M. Weiland’s Character Arcs Course on the Digital Freedom Academy. I’m working through at my own pace. LURVE!

I’m also reading Kate’s Structuring Your Novel, and an ARC of her forthcoming Structuring Your Character Arcs. All of it is serving to, with my memories of the original blog/vlog/pocast posts that became the basis of these books and her course, ingrain Kate’s techniques in my long-term memory.

Finally, I’m trying to find an editor/mentor with whom I can work, long-term, to develop my drafts into finished products. I will, of course, let you know how that goes. 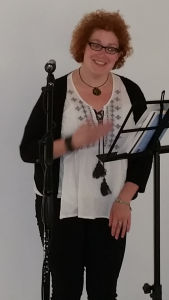 In September, I also attended a couple of writerly events. The first was 100,000 Poets for Change in North Bay, Sept 22. I went on a poetic road trip with my friend and Sudbury Poet Laureate, Kim Fahner 🙂

Then, last night, I took a friend to the launch of Danielle Daniel’s memoir, The Dependent. Latitude 46, the publisher, put on a lovely event in the catering space at Verdiccio’s. There was music, food, and a reading by Danielle. And, of course, I bought her book 🙂

It’s so nice to be able to support local arts and artists.

Today, despite it being Culture Days weekend here in Sudbury, and chock full of events, I had to retreat.

September also marked the first meeting of the 2016-17 Sudbury Writers’ Guild season, and it was anthology-palooza. We’re hoping to have Sudbury Ink, which features two of my speculative stories, printed in time for Wordstock.

The anthology is a promotional tool for the Guild and just shows the variety of the talent within the SWG. Having said that, it does have an ISBN and will be a formal, self-published, writing credit.

We hope to have a launch event, aside from Wordstock, later in the year. I’ll keep you posted 🙂

Although I attempted to gather my C.V. together for a Canada Council Works in Progress Grant, I realized the significant gaps in it. I haven’t kept track of the workshops I’ve attended, organized, or delivered. I haven’t kept track of the readings I’ve done. I have some forensic investigation of my writerly exploits to complete before December, when the Ontario Arts Council Northern Writers grant application is due.

I just couldn’t get my shit together for the CC app. It’s due today. Next year, the CC will be moving to a new funding model, so I might have a better chance then, in any case.

I’m also looking forward to how my writing life will take shape in coming years.

In past years, I was focused on writing in preference to everything else. I have six novels to show for it, but only one was even close to complete. This year, I focused on revision, but was only able to do a basic run-through of each novel, get the lay of the land, so to speak, and make notes for more in-depth revisions in the future.

I want to plan out a reasonable pattern which will balance writing and revising and hopefully allow me to get something to market.

The basic idea, for now, is to focus on in-depth revision on one project from January through to March, draft a new novel, April and May, revise another novel June through August, focus on NaNo prep and other projects (short fiction?) in September and October, participate in NaNo in November, and finally finish whatever might be outstanding from the NaNo project in December and prep for my next in-depth revision.

It may be ambitious, but my plans are always subject to change, given life 😉

And that was the month of September in this writer’s life.

Next week, I’ll get on with session reportage from WorldCon.

*Jamie Raintree, the creator of the Writing and Revision Tracker I use (and have used for years), is busy preparing the 2017 version. Watch this space for news on when the 2017 tracker is ready for order! Seriously, it’s worth it.

**Wordstock Sudbury 2016 will take place from November 3-5, 2017. Though I’ll be out of town training for the Thursday and Friday events, I will be manning the Indie Bookstore for a while on Saturday, and then participating in the commercial genre fiction panel in the afternoon! There will also be an opportunity to read at the open mic Saturday night. I’ll let you know more as the schedule is firmed up.