Week two was a rough one. I struggled, while working, to ramp up my production, but a couple of things happened that pushed me off-course.

The first was that a family member had an operation and is waiting for further test results. We’re all trying not to worry until there’s something to worry about but waiting is the worst. It affected me more than I thought it would.

The second was that former employees and authors of ChiZine Publications spoke out about systemic financial, professional, and personal harassment and abuse. The stories that continue to emerge on social media are horrific and have made it as far as File 770, Publishers Weekly, and the SFWA’s Writer Beware. Though the publisher and managing editor have stepped down, they still own the company. While a statement was released, and a new publisher has taken charge, promising all accounts will be settled by the end of 2019, no apology was made nor was any acknowledgement of the harm done or of trying to make amends other than contractual.

Though I am still trying to process this, I will state categorically that I believe all the testimonies I’ve read. I believe all the victims who have come forward and all the victims who have chosen not to. I know many of them from the SFF community, and I support them unequivocally. I thank those who have come forward for their bravery and hope that justice will ultimately be served for all concerned.

It’s still an unfolding tragedy that is having ripples throughout the Canadian SFF community.

In the midst of this, I was also struggling with story logic issues. I had to work through events in a way that would read well and make sense. That slowed my pace considerably. 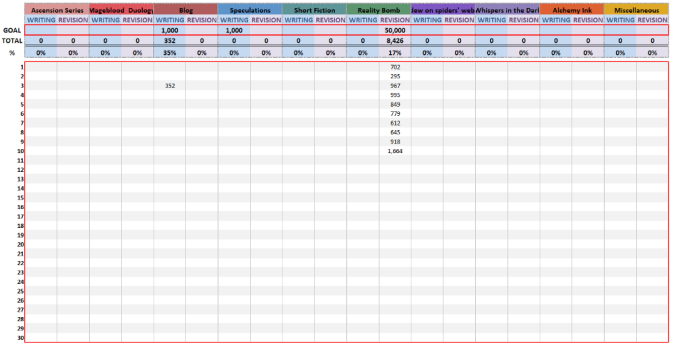 As a result, only yesterday did I approach the daily writing goal for NaNoWriMo, and I’m pleased that I was able to accomplish that. Unfortunately, I will write short for the next couple of days because I have to finish my next DIY MFA column.

I am behind by a considerable margin. I’m not going to stop trying, though.

All this unrest is also why I’m posting this update a day late.

Until next week, be well, be kind, and stay strong. The world needs your stories.