So … this past week was a week of delivering training at work.

Day one, I felt obliged to nap after supper. And I don’t nap. Generally, I might lay down, but I don’t sleep. As a result, I don’t even bother getting prone most of the time. But I was bushed. I went to bed at 8 pm and woke up just after 10 pm.

During the day, the participants, all of whom work earlier shifts, asked for the training to shift to an earlier time, as well. Remember that meme? I’m not an night owl. I’m not an early bird. I’m some kind of permanently exhausted pigeon? Yeah.

For the rest of the week, I decided to nap when I got home so Phil could wake me up for supper. Well, Torvi had something to say about that and I didn’t end up getting any quality rest.

Needless to say, I went into maintenance mode. I dealt with my daily curation tasks for my weekly curation posts as quickly as possible, and then relaxed for the rest of the evening.

That’s right. I didn’t write a word on my novel all week.

And I probably won’t write a word this weekend, either. I have a friend coming in from out of town that I’d much rather visit with. I have a deadline for the Sudbury Writers’ Guild newsletter I have to meet. Priorities.

I’ve had to fight a certain amount of guilt over not writing. But I haven’t felt the burning desire to get back to the page, either. The last time I took a purposeful break, I was immediately thinking about what I would be writing. Even though I’d stopped writing, my creative brain was still immersed in the project and when I returned to the project, I was working at full steam.

That hasn’t happened this time.

What this means is that I’ll probably be drafting Playing with Fire into April. So be it.

This is my reality at the moment. I have to honour what’s happening in my life, make choices, and live with the results. I will be adjusting my goals accordingly.

Things continue to improve, in small increments, for Phil at work. He’s felt motivated enough to clean up the basement so Torvi can go down there and spend time with him if she wants.

Today was the first time we coaxed Torvi down into the basement. I have a couple of old pillows I took down there for a dog bed (until Phil buys another one) and a few toys. It’s been a bit of a stressful afternoon. Torvi doesn’t like change. She’s been constantly running the stairs and whining. It was to the point that we couldn’t tell when she was asking to go out. But there were no accidents. I’m counting it a win.

She’s also making progress with controlling her excitement when meeting people. She still jumps and freaks out, but if we get visitors to ignore her, she settles quickly. We’ll see how it works with our guests tonight. 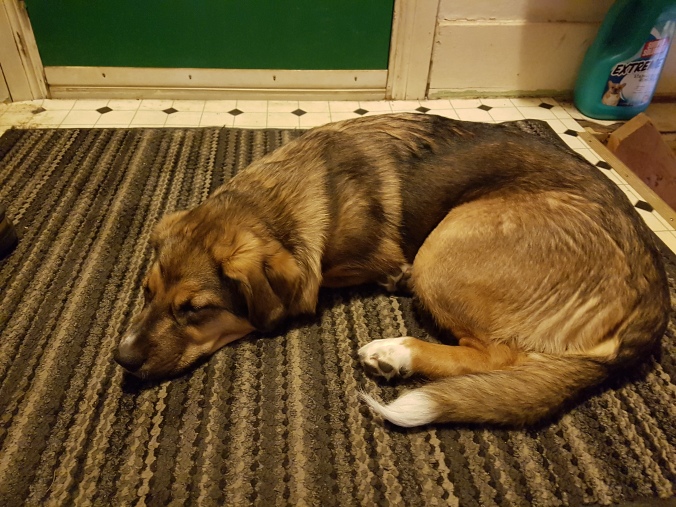 I weighed her last week. She’s 42 pounds. Woof! Here she is, waiting for Phil to come home, and NOT destroying footwear (!) Another win.

And she’s starting to lose her puppy teeth. I know, it’s kind of gross, but if I find them, I save them. I still have some of Nuala’s teeth.

And that’s all the news for the week.

Until the next time I blog, be well, be kinds, and stay strong. The world needs your stories.