I’d encountered Jim C. Hines before, on the pages of John Scalzi’s and Chuck Wendig’s blogs.  I was curious about his penchant for cross dressing and why he would write a book about a libromancer.

So, of course, I was eager to find out more about the man.  His Saturday night keynote did not disappoint.  Several people I spoke to reported tearing up not once, but several times during the address.

As I mentioned, I do not have an eidetic memory.  I couldn’t give you the blow by blow of the speech and truth be told, I was listening to and enjoying it rather than taking notes.  Mea culpa.

Fortunately, I don’t have to. Jim has posted the text and links to a three-part recording of the keynote on his blog: http://www.jimchines.com/2013/10/my-keynote-from-siwc2013/

One anecdote was about a teacher who had a young man in one of her classes.  He refused to read. 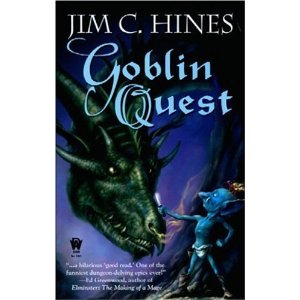 in plain sight.  The student asked about it one day and the teacher said that he probably wouldn’t like it.  The student picked it up and not only read that one, but asked for and read the rest of the books in the series.

The experience of reading Jim’s books changed this young man’s life.  Not bad for a series which features a protagonist with a nose-picking injury 🙂

Jim also wrote a short story for an anthology of humorous fantasy.  Oddly enough, he chose the topic of cancer, but after reading the story, an audience member approached Jim and told him that her father was dying of the same cancer.

She asked for a copy of the story, took it to her father, and the two of them laughed until they cried.  It was cathartic and comforting.

Take heart and keep writing.  Your stories matter too.