Though events and sessions weren’t scheduled to get under way until June 13, strictly speaking, I’m pretty keen to show up and get ready.  I need a little time to rev up and get in the social way of things.  Any conference is pretty much a social marathon for however many days it lasts.  I have to work up to it. 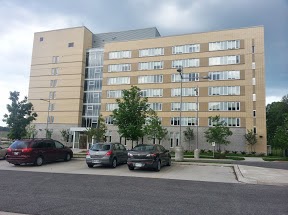 My home for the week

Orillia is a little over three hours away from Sudbury.  I took the full day off on the 12th and relaxed for the morning, picked up my rental car, packed, and got underway just shy of 2 pm.

CanWrite! was hosted this year, as last, by the Orillia campus of Lakehead University.  It is a small campus, but it is a fairly recent construction.  I checked in, unpacked, and collapsed for a few minutes before heading out to my fend-for-yourself supper, returning in time to attend the welcome reception.

At the reception, I reconnected with some old acquaintances and made some new ones.  Among the old were Jake Hogeterp, who heads the virtual branch, Matt Bin, the prez, poet-on-demand, Jean Kay, Lamont Mackay of The Cooking Ladies, and Anita Purcell, our tireless Jacqueline-of-all-trades.  Among the new, Jennie Chabon and Kathleen Schmitt from BC and John McDonell from Nova Scotia.

Though I thought I was heading back to my room early, it was after ten by the time I made it up, and nearly midnight by the time I’d checked my precious social media (SoMe) and powered down for the evening.

The first morning, Ruth Walker led the session.  The second and third days were led by Sue Reynolds.

I’m not going to go into detail about these sessions, as the writing done is always intensely personal, but great material was produced all three days by all the participants.

I got some work done on some missing pieces of Initiate of Stone while I was there and that, along with some bits that might produce good stories, made the circles worthwhile for me.

Ruth was new to me, but I’d met Sue before.  I went to the University of Guelph with her sister, Sandy, and then I met her and her partner James last year at the Algonkian conference.

Other bits and pieces

Initially, I was a little concerned.  I could find no information on the Lakehead U site that would tell me what kind of internet would be available.  I’d hoped to try Tweeting some of the sessions.

When I checked in, I was advised that wifi was limited to the common areas of the residence building and required a password, but that I would be able to “plug in” up in my room.

In my room, I looked for a network cable, but couldn’t find one.  It took the kindness of Jean Kay to reveal the secret: the cable was coiled up and tucked into the base of the telephone.

So one problem solved, but the next day, when I attended the first panel discussion, I discovered that there was no signal in the academic building at all.  Bummer.

The food proved very good and was one of the consistent positives of the conference.

The rooms were nice, but the beds were a little harder than was comfortable.  Such is residence life.

Tomorrow, I’ll begin to document the panels and sessions for you.