I’ve been a fan of Jane Ann’s for some time and when I saw that she was launching her latest historical fiction novel at 2018’s Ad Astra, I had to pick up a copy. Jane Ann is an excellent storyteller and The Sorrow Stone did not disappoint. I have been lax in my commitment to write reviews for my author friends. I read The Sorrow Stone some time ago and I’m only now rectifying my tardiness in writing my review. 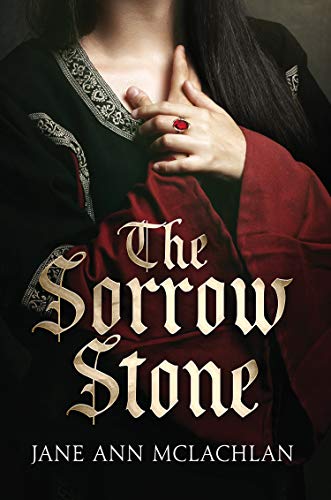 Winner of the Royal Palm Literary Award for Historical Fiction.

What if you could pay someone to take away your sorrow?
In the middle ages people believed a mother mourning her child could “sell her sorrow” by selling a nail from her child’s coffin to a traveling peddler.

Lady Celeste is overwhelmed with grief when her son dies. Desperate for relief, she begs a passing peddler to buy her sorrow. Jean, the cynical peddler she meets, is nobody’s fool; he insists she include her ruby ring along with the nail in return for his coin.

A strange but welcome forgetfulness comes over Celeste when the transaction is completed – until she learns that without her wedding ring her husband may set her aside, leaving her ruined. She embarks on an urgent journey to retrieve it. But how will she find the peddler and convince him to give up the precious ruby ring?

Pretending to be on pilgrimage, Lady Celeste secretly hunts for the peddler. In dreams and brief flashes her memory begins to return, slowly revealing a dangerous secret buried in her past. Will she learn what she needs to know in time to save herself, or will the knowledge destroy her?

If you like realistic, well-researched historical fiction with evocative prose, complex characters and a unique story, you’ll love The Sorrow Stone. Travel to 12th Century France with this compelling story based on an actual medieval superstition.

While this novel is somewhat of a departure from her adult and young adult science fiction publications, the inspiration for the story is a superstition and fantastic elements infuse the novel.

In the wake of the transaction that forms the inciting incident, Celeste is not only forgetful, but she’s also lost her capacity to feel compassion in any form, making her alien to her lady’s maid, the nuns of the convent she’s been sent to for her recovery, and the clergy and pilgrims she meets on her journey.

The only thing she’s certain of, at first, is that something terrible happened that sent her to the convent and, because she can no longer feel the love she once did for her dead child or her husband, while she knows the something terrible involves her infant’s death, she can only assume that her life had been one of cruelty and pain to have resulted in her current state of health. Celeste uses her mind and sense of logic, skewed because of her lack of feeling, to try to unravel the mystery.

She’s afraid of revealing her compromised state to anyone and engages is some radical behaviour to achieve this end. She travels with only her maid as a companion, she seeks the means to become independent, and she tries to track down the merchant to whom she traded her sorrow and her wedding ring with the intent of reclaiming only the ring and not her emotion, now viewing it as a weakness. Her actions in pursuit of these goals verge on cruel.

For his part, the pragmatic merchant Jean finds his life plagued by unwanted compassion. He wants to rid himself of Celeste’s ring and the sorrow attached to it, but his every attempt to do so ends in failure or worse. After he recovers from a robbery and assault that nearly results in his death, Jean returns home to find his bad luck extends to his family. His daughter is seriously ill and may die if he doesn’t find the means to set things right.

The outcome of these intertwined journeys involves a mystery, betrayal, and greed on multiple levels. As Celeste’s husband pursues her, thriller elements come into play. Can Celeste reclaim her ring before her husband catches up to her and finds out what she’s done?

The Sorrow Stone is a complex story about how important it is to achieve a balance between logic and emotion, the destruction that greed engenders, and the revelatory and healing powers of love.

Four out of five stars.

I really liked it 🙂

I’m going to try to catch up on my review obligations over the next weeks, so you can look forward to more reviews on writerly goodness.