As promised, I’m taking a break from worldbuilding, itself a fairly endless task, to talk about my most recent draft.

Officially, this is number six (oh gawd, will I ever be finished?) but I’ve actually been through the MS once, and now I’m editing in fits and starts between critiquing and platform-building, and working.

I’m so tired, I feel like I’m sleepwalking.  With my somnabulant history, maybe I am …

I started honing number six in January when I joined my critique group on Author Salon.  The focus, at first, was my profile, which only featured about six pages of my writing, plus a short synopsis, hook line, conflict statement, protagonist, antagonist, and other character sketches, unique world, climax and denouement.

I still haven’t got the hang of it.

In February, AS announced their first Showcase, and I submitted my bits and pieces, only to be advised that my novel was far too long to be considered.  This happened at the same time that my original blog, labbydog, was hacked.

Faced with two fairly substantial pieces of bad news, I was initially paralyzed.  As I cobbled together my online life, I tried to figure out how I was going to compress a 250,000 word novel into 110,000 words (the AS upper limit).  I sat in a stunned boggle for days trying to think of what I could cut without sacrificing the story.

When my mind stopped spinning long enough to have a coherent thought, I realized the solution was simple, and had been staring me in the face the whole time: cut the bloody thing in half, revise, and edit down from there.  It was a far less daunting task that the one I was considering, and eminently doable.

So I cut, and went through the whole thing, tweaking as I went.  My mid-point was actually a little more than half-way through the original MS and even after that first review, I was still at 150,000 words.

In March, I also posted my first 50 pages to the AS critique group.  Well it was supposed to be the first 50 pages, but mine was close to 90.  The feedback I got was great, but meant that I would have to rewrite a fair chunk of my first act.  I started thinking about how I was going to do that.

Then life got a bit crazy.  March 14 would have been my dad’s 71st birthday, followed in quick succession by the anniversary of his death and funeral in April.  I wanted the world to stop at that point, but the crazy continued with some unexpected kudos at work and a new position in May.

At that point, I was just struggling to keep up, treading water and taking big gulps of air while the waves washed over me.  I know I was overwhelmed.  I knew it even then, I just didn’t have the time to feel it.  I didn’t work on my novel for the entire month of May.

Since then, I’ve conquered the rewrite, revised 30 pages out of the first part of Initiate of Stone, and just recently returned to the critiquing world.

So I haven’t finished this strange draft yet.  I have to work through the three remaining parts of the novel and cut the words/pages to the point where IoS is a streamlined machine, within the AS word limits, and hopefully suitable for a future AS Showcase.

I also have to revise my profile (again) to try and reflect the unique angle my novel presents.  This is a challenge, because IoS is a straight up, traditional fantasy.

What this process has taught me so far:

Will let you know how it goes. 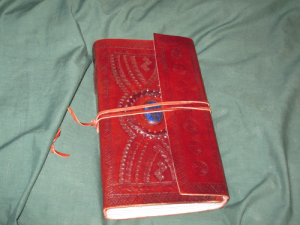 me for Christmas.  Embossed leather cover with a nifty semi-precious stone embedded in the leather, home-made, recycled paper laced into the cover.  I even have a refill that I can lace in when I’ve used up all of these pages.

Isn’t it just the coolest writer-gift ever?  I think so.

How is your creative project going?