Welcome to tipsday, my humble curation of informal writerly goodness.

We’re officially six months into #pandemic life and here in the northeast, we’re waiting for the other show to fall following the return to school last week. We’re already experiencing a bump in infection numbers, likely due to covid exhaustion and the relaxation of safety measures over the Labour Day long weekend.

Wear your masks, maintain physical distance, and wash your hands. We don’t have a vaccine yet.

Now let’s move on to supporting your creative endeavours.

Jael McHenry: is writing work? The answer is not as simple as you’d think. Jim Dempsey wants you to edit at your own pace. Then, Juliet Marillier offers some advice on writing a many-stranded story. Kathryn Craft shares a quiz actually helpful for writers. Later in the week, David Corbett discusses love, hope, and the dystopian darkness. Writer Unboxed

The “bury your gays” trope, explained. The Take

Inigo vs. Westley: perfectly subversive. Why is this in tipsday? It’s all about storytelling through fight scenes! Jill Bearup

Chuck Wendig muses on plot and character (and giving writing advice at the end of the world). Terribleminds

Piper Bayard and Jay Holmes: fiction faves of the espionage pros. Writers in the Storm

Nina Munteanu considers cymatics and how frequency changes the very nature of matter and energy.

Anne Ray takes us on a journey from La Jetée to Twelve Monkeys to covid-19. JSTOR Daily

This first episode of the new season was awesome! Desmond Cole, Saleema Nawaz, and John Elizabeth Stintzi. Shelagh Rogers, The Next Chapter, CBC.

Thank you for stopping by. I hope you found something to support your current work(s) in progress.

Until Thursday, be well and stay safe!

2020 has been an apocalyptic year between covid-19, George Floyd’s murder, and the resulting fed up protests. Last week I was mired in despair, complicit in my silence, and deeply aware—and ashamed—of my white privilege.

I’ve read Black authors, Indigenous authors, and authors of other cultural backgrounds. I’ve taken a few Writing the Other courses. I’ve long thought that Canada’s greatest shame was our treatment of Indigenous peoples, but I hadn’t realized the hateful legacy of Canada’s treatment of Black people. I’m deeply grateful to the Black writers who’ve published insightful articles in the Canadian media during the last week (I’ll share some of them on Thursday and in ensuing weeks).

I have hope, though, because all four officers involved in George Floyd’s murder have been charged, even though it took some time to happen. I have hope because of all the protests, not only across the US, but also across Canada and all over the world, in which white and black protestors have stood, or knelt, side by side, demanding change.

I understand it is only a beginning and that we cannot ease the pressure on our elected officials until true and lasting change occurs. But I have hope.

Now, onto the informal writerly learnings.

Therese Walsh: the ourstory of now (BLM). Don Maass: the quest in the quest (BLM). Jael McHenry is getting comfortable with failure. Writer Unboxed

Jami Gold explains the point of foreshadowing. Later in the week, she suggests how to format unusual dialogue.

Jeanette the Writer: even MS Word says two spaces after a period is an error. Gabriela Pereira: this needs to be said (BLM). DIY MFA

Janice Hardy explains why you should tighten your novel’s narrative focus. Fiction University

Thank you for stopping by. I hope you were able to find something to support your current work in progress.

Until Thursday, be well and stay safe. Whatever your lane (education, support, donate, protest) become part of the solution. And vote with your conscience. We need to put pressure on our politicians to make change stick. 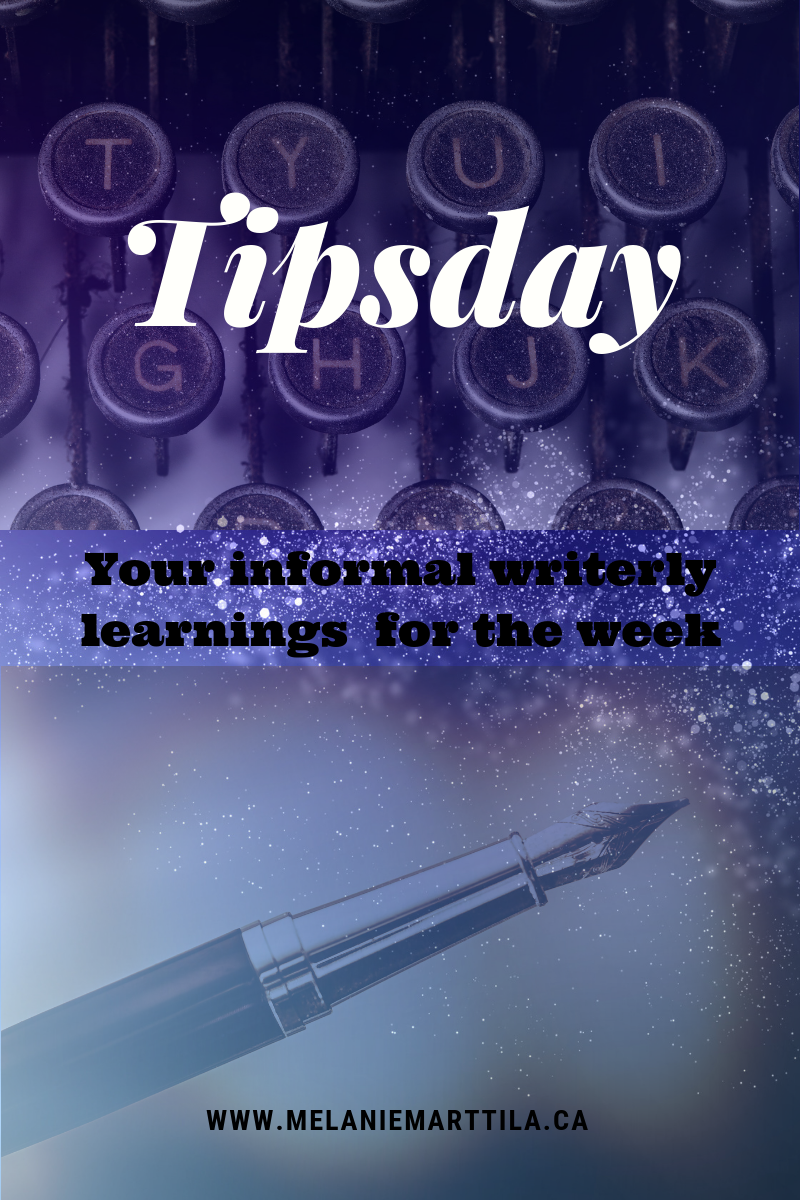 Thanks for stopping by and I hope you found something you need to fuel your current work in progress.

Until Thursday, be well, my friends.

It’s good to be back.

This week’s curation of informal writerly learnings for your consideration.

Julie Glover talks plotting, pantsing, and personality type. [Hehe! I was one of the 87 people on FB who responded to Julie’s question 🙂 ] Lisa Hall-Wilson shares four pro tips for writing the emotional journey in deep POV. [I’m participating in Lisa’s five day deep POV challenge!] Writers in the Storm

Jael McHenry considers the novelist’s necessary evils. Jim Dempsey says, writing is a labyrinth of choices. Sarah Callender forgets to remember that writing can be uncomfortable. Kathryn Craft lists 12 signs that you’re afraid of your work in progress. Writer Unboxed

Janice Hardy explains how to ground (and hook) your reader in your opening scene. Then, Janice shares lessons learned from a decade in publishing. Fiction University

Meg La Torre visits Jenna Moreci and explains everything you ever wanted to know about literary agents.

Emily Wenstrom explains how (and why) to market yourself. Savannah Cordova shares five highly effective ways to reboot your creative system. DIY MFA

Sabrina Imbler reports that the Merriam-Webster of medieval Irish has just got a major update. Atlas Obscura

Joolz looks at English idioms and where they come from. ‘Cause language!

And that was tipsday. Thanks for stopping by and I hope you found something useful for your current work in progress.

Until Thursday, be well, my writerly friends!

You’ve worked hard this week (so far). Reward yourself with some informal writerly learnings.

Jael McHenry: it’s always in the last place you look. Donald Maass considers persuasion.  Then, Kathryn Craft wants you to give your reader an experience. David Corbett has a conversation with Zoe Quinton about developmental editing. And Kathryn Magendie writes about becoming a rogue planet (when you lose your publisher). Writer Unboxed

Abigail K. Perry looks at characters in terms of grit, wit, and it. Slush Pile Survivor

Leanne Sowul: what writing can do for you. DIY MFA

Robert Lee Brewer looks at the difference between it’s and its. I know, seems basic. Doesn’t mean I don’t make the mistake from time to time. Reinforcement is always good. Writer’s Digest

Richard Lea and Sian Cain pay tribute to Toni Morrison, who died August 6, at the age of 88. The Guardian

Dwight Garner honours Morrison as a writer of many gifts who bent language to her will. The New York Times

There were so many more tributes, this humble curation would have been huge. I just chose a couple.

Thanks for stopping by. I hope you found something of value.

Until Thursday, be well, my writerly friends!

Here’s a nice bundle of informal writerly learnings for you 🙂

Jael McHenry is making room for silence. Nancy Johnson: what white writers should know about telling black stories. Donald Maass explores the myriad ways in which mystery shapes your story (and returns to the pithy one-word titles). Cathy Yardley offers a snapshot of her writing process. Writer Unboxed

Sara Letourneau is identifying themes in poetry. Laura Highcove wants you to reclaim your agency from writer’s block. Then, Charlene Jimenez describes the five people fiction writers need in their lives. DIY MFA

Jenna Moreci rails against her ten most hated hero tropes.

Nathan Bransford thinks this Roald Dahl video is everything. I so love process-y stuff 🙂

And Catherine Ryan Howard shares her process (in parts—more to come): the BIG IDEA.

I hope you enjoyed this curation and found something for your current of next creative project.

Come back on Thursday for your weekly dose to thoughty!

Until then, be well, my writerly friends 🙂

My first post-NaNo Tipsday! Have you been missing your informal writerly learnings? Here they are!

Donna Galanti stops by Writers in the Storm: letting go in writing and in life.

James Scott Bell stops by Writers Helping Writers to share some tips on beginnings and backstory.

Angela Ackerman guest posts on Mythcreants: taking character relationships to the next level.

Chris Eboch posts on Fiction University: editing after #NaNoWriMo is the way to make your #writing shine.

Colleen M. Story drops by Writers in the Storm to show you how to restore your love of writing.

Agent Barbara Poelle answers another funny you should ask question: how do you support your more successful writer friend when you’re feeling jealous? Writer’s Digest

Brian Curian shares three simple things you can do to find your writing voice. The Writing Cooperative

And that was Tipsday.

Unfortunately, my brain could not brain following NaNo (not unusual) so there will be no Thoughty Thursday this week. I hope to accumulate enough inspirational, research-y, creative stuff for next week.

Until next Tuesday, be well, be kind, and stay strong. The world needs your stories. 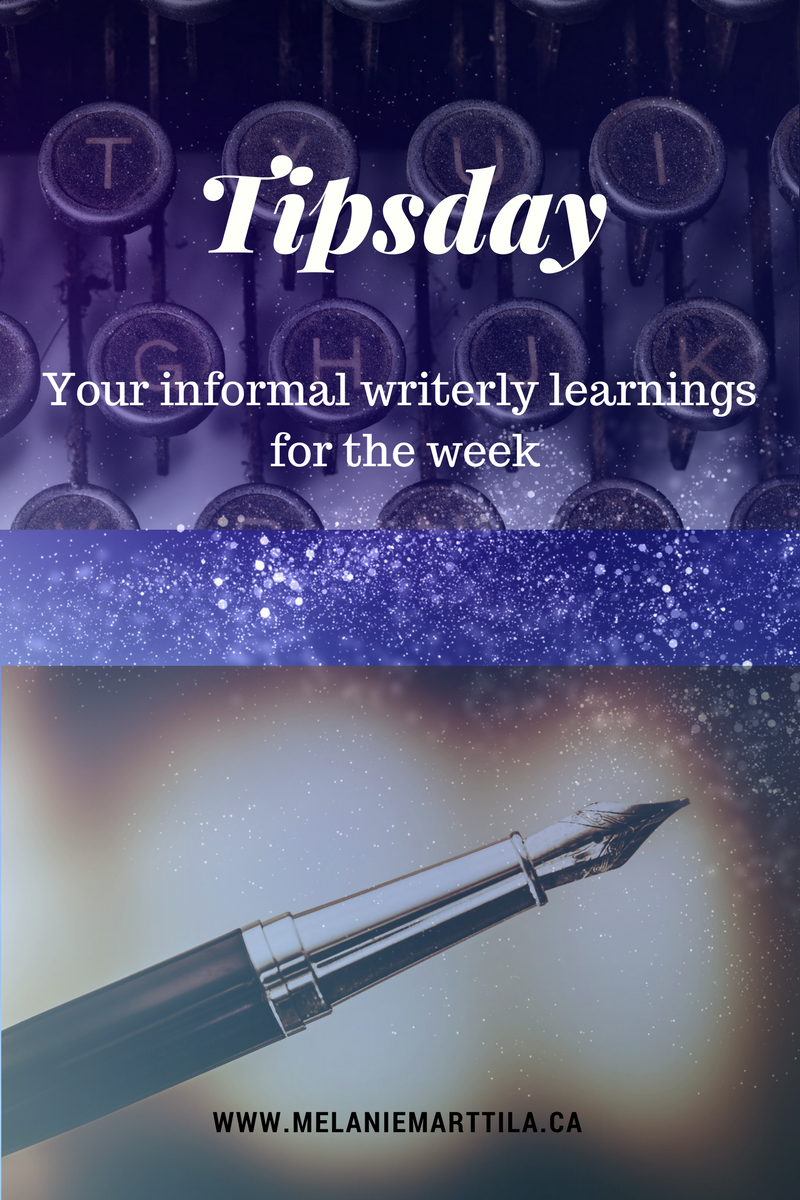 I’m back with your weekly infusion of informal writerly learnings.

Jael McHenry is writing someone else’s story. Or, she has and is sharing the tale with us 🙂 Writer Unboxed

Natalia Sylvester waxes on revision as a form of reimagining. Writer Unboxed

Lisa Hall-Wilson gives us a checklist for writing deep POV like a pro. Writers in the Storm

Margie Lawson touts the brilliance of backstory slip-ins. Writers in the Storm

Jami Gold offers some NaNoWriMo prep tips for getting your story idea ready.

Cold Crash Pictures lists their five favourite feminist tropes (as a counterpoint to the last video I shared from them).

If you found something helpful in this mix, consider coming back on Thursday for your weekly dose of thoughty.

Until then, be well, my friends 🙂

Another Monday survived and here I am with another batch of informal writerly learnings for you.

Nancy Johnson wants you to find the tribe that fuels your writing. Writer Unboxed

Success means taking the long (no, longer than that!) view. Robin LaFevers on Writer Unboxed.

Kathryn Magendie recommends Gas-X for writers—results may vary. Take the bloat out of your manuscript! Writer Unboxed

Gabriela Pereira returns to Writers Helping Writers with part four of her writing by design series: contrast, or light versus dark.

Ellen Brock explains how to describe a character (without boring your readers).

Chuck Wendig: your first draft does not require your faith in it. The work just needs the work. Terribleminds

Jami Gold warns, don’t assume showing is better. There is a place for telling in your novel.

Ashley Allis illustrates the philosophy of Hayao Miyazaki: the flawed concept of good versus evil. Brilliant. Geeks are Sexy

And that was tipsday for this week. Come on back on Thursday for some thoughty, if you don’t mind 🙂

Until then, be well, my writerly friends.

Here, once again, are your informal writerly learnings!

Jessi Rita Hoffman stops by Jane Friedman’s blog to help you prune hedge words and inflation words from your writing.

Fae Rowan shares a simple tip to help get rid of saggy middles. [But … will it work on ma belleh—lol?] Writers in the Storm

Jami Gold looks at the editing process and what every writer needs to know to improve.

Backtracking a bit to give you episode 1 of Ask a Puppet (Mary Robinette Kowal). Seriously hilarious.

Mary Robinette Kowal shares her writing process in honor of her birthday.

Chuck Wendig: yes, you can hiss without sibilance. Terribleminds

Jessica Stillman: why you should surround yourself with more books than you’ll ever have time to read. Inc.

Michael Blanding reports on how plagiarism software unveiled a new source for eleven of Shakespeare’s plays. And no, before the histrionics start, Shakespeare did not plagiarize. The New York Times

I hope your week got off to a great start. Be well until Thursday 🙂