It’s thoughty Thursday! Fortify yourself for the weekend and get your mental corn popping (i.e. get those ideas ping-ponging around inside your skull)!

The Capitol insurrection held me horrified. It still does. And the continued attempts of a certain despot to assail social media to issue a call to arms to disrupt the inauguration have me once again fearing for the future. This is not just America’s problem. It has the potential to disrupt nations across the world.

Allison Miller reveals the hidden meaning of a notorious experiment. In a 1961 grant application, filed before the Eichmann trial was in full swing, Milgram “proposed to study the conditions under which compliance with authority could be increased or decreased—knowledge that had obvious military and political applications.” JSTOR Daily

Ashawnta Jackson say that when mambo was king, its creators were stereotyped. JSTOR Daily

And all this political and racial injustice while we’re in the midst of a pandemic.

We have to do better, people.

How alchemy led to modern-day chemistry and medicine. SciShow

Sylvia Poggioli introduces us to the women uncovering the lost works of female Renaissance artists (because, who else?). NPR

Thanks for stopping by. I hope you found something to inspire your next creative project.

Until next tipsday, be well and stay safe, be kind, and stay strong. The world needs your stories!

Welcome to Thursday! You know what that means; it’s time to get your mental corn popping.

Tanya Talaga: there have always been two Canadas. In this reckoning on racism, both must stand together for Indigenous people now. The Globe and Mail

Cammy D shares his experience as a Black youth in Canada.

Brene Brown talks to Ibram X. Kendi about how to be an antiracist.

Brenna Ehrlich recounts the windy history of Penny Lane: the Beatles, the slave trade, and a now-resolved controversy. Rolling Stone

The JSTOR Daily editors list 15 Black women who should be (more) famous.

Evan Ratliff: we can protect the economy from pandemics. Why didn’t we? Wired

SciShow Space news: our galaxy could be full of exoplanets with oceans and Pluto’s surprising history.

Stacey Leasca: the lost continent of Zealandia disappeared millions of years ago, but these new maps show it in stunning detail. Travel + Leisure

Thanks for the visit. I hope you found something to inspire your next creative project.

I’ll be putting my next chapter update for June up this weekend. Until then, be well and stay safe!

It’s time to get your mental corn popping!

Eleanor Cummins: how humans have created color for thousands of years. Popular Science

How nature works as seen in stunning psychedelic illustrations of scientific processes and phenomena in a 19th century French physics textbook. BrainPickings

Satellite data reveals a record number of fires in the Brazilian rainforest. BBC

On a local level, the CBC reports on the Sudbury Conservation Authority’s puzzled reaction to direction and further cuts to funding.

SciShow Space news: new hypotheses about Jupiter’s core and estimates of the numbers of Earth-like planets.

More SciShow Space. This time, they’re breaking down the process that could make Mars settlement possible.

SciShow wonders why there aren’t cancer-sniffing dogs in service.

I hope you found something to inspire or support your current creative project.

See you on the weekend for my next chapter update.

Until then, be well 🙂

Jonathan Watts says that concrete is the most destructive material on Earth. The Guardian

Ed Yong reports on the troubling discovery made in the deepest ocean trenches. The Atlantic

SciShow Psych looks at depression and anxiety and what psychologists and neuroscientists have discovered about them.

And they science the shit out of inspiration 🙂

Messy Nessy opens their cabinet of Chic curiosities to tour Bernie Madoff’s underwater ballroom. This was featured in Roz Morris’s novel, Lifeform Three. If you like abandoned places or cool architecture, this will be your thing 🙂

Lily Strelich tries to solve an artful mystery: why are Georgia O’Keeffe’s paintings breaking out in pimples? The Smithsonian Magazine

And that was your thoughty for the week.

Until next time, be well, be kind, and stay strong. The world needs your stories.

Disclaimer: I am not perfect and neither are my notes. If you notice anything that requires clarification or correction, please email me at melanie (dot) marttila (at) gmail (dot) com and I will fix things post-hasty. 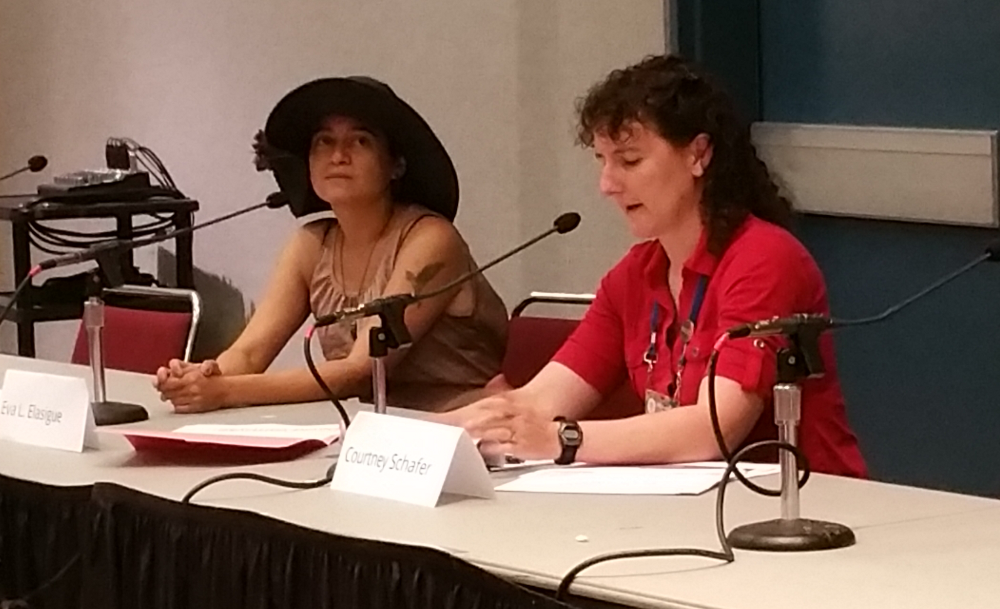 CS: Kepler discovers exoplanets by observing the subtle signs of a planet passing in front of its star. It’s focused on a small area and it’s only covered 3% of that space in detail so far. The number of exoplanets discovered is large, but only a fraction of circum-binary systems have planets that might be habitable. The planets discovered in those systems are massive, though. It’s exciting that so many planets have been discovered.

EE: One of Larry Niven’s conjectures is that a planet in a binary system would have an off-center core.

CS: It’s possible that a planet in a binary system could have a figure eight orbit. It could also be more easily ejected from the system. Since circum-binary systems are fairly common, there might be a large number of rogue planets out there. To discover the composition of a planet, you need to use spectroscopy.

Q: Is there publicly accessible software for fact-checking the plausibility of an invented system?

A: There are solar system simulators.

CS: You can also check with your local amateur astronomy club.

Q: Is Alpha Centauri A, Rigil Kentaurus, a binary star?

CS: That’s the current understanding. One thing to keep in mind is the force that would be exerted on planets in these systems. If we look at the moons of Jupiter, they need to have their own magnetospheres to maintain an atmosphere. Otherwise, Jupiter strips it away.

EE: You should check out Galaxy Zoo. It’s a citizen science initiative.

[At this point, the ideas starting coming fast and furious. To be honest, I’m not sure who said what.]

The most favorable binary systems for planets are those in which both stars are around 80% of the sun’s size. They’re also fairly close to each other. The minimum stable radius for a planet in a binary system is 2-4 times larger than [… sorry didn’t catch this. I think it’s Jupiter. Wikipedia indicates this would be correct. If the planet is a gas giant, it may not support life, but its moons might. Smaller stars would accommodate smaller planets, but the planets may not be habitable, depending on their orbits and the relative light and heat they receive from their suns.]

They probably didn’t form in their current orbit. There’s an instability in binary systems which could result in the planet spiralling into one of the stars, or being flung out of the system. Planets in binary systems would move around unless they could find a stable orbit.

There are also mismatched binary systems. A blue giant with a red dwarf, for example, or a sun-type star with a black hole.

For more information: If you Google the term circum-binary systems, you will find a lot. Navigate to dependable sources, like NASA, or Space.com (unlike yours truly). Or head for fun but dependable sites like Phil Plait’s Bad Astronomy column, currently hosted by Blastr.

Until next I blog, be well, be kind, and stay strong.

Some facts and some fun. Just what you were waiting for!

Valerie Strauss of The Washington Post asks the question, is homework an unnecessary evil? I can tell you, I rarely did mine, even in high school. If you’re heading for university, all you really need to learn is independent study skills and effective note taking (IMHO).

Fashion through the ages, from Viral Spell.

Looking for some information on exoplanets? This great series of graphics (artists’ renderings) from Space.com includes information (off to the right) with a read more link. Could one of these planets be the setting of your next science fiction story?

Fabulous information from Popular Mechanics on how we might actually build a space colony.

More of the National Geographic’s 2014 Photo Contest featured in The Atlantic’s In focus column.

This guy can really toot his own horn 😉 The CBC reports on a Laurier student who covers Outkast’s Hey ya! on his French horn using his Mac to loop tracks.

John Scalzi share this Mary Lambert video last week and I fell in love. Seriously. I think this might be my new anthem 🙂

Now this was useful 🙂 45 essential dog care hacks, from Lifehack.

Discovery shares pictures of kissable animals. Some of these choices might be questionable.

Thanks for coming along for the ride.

See you Saturday with more WWC2014!