Yes. This post is late. I just couldn’t finish it last night.

The last weeks have made it clear that I haven’t interrogated my white privilege nearly hard enough.

I’ve been heartened that charges have been laid against the four police officers involved in the murder of George Floyd and by the ongoing protests all over the world. The call to defund police makes so much sense, I hope the will if found to make this work. I have hope that change is coming, but I also know that we can’t stop working toward a better future until our politicians are moved to act or are removed from office for failing to do so.

Meanwhile, I’m still working from home, and am about to commence the last of four consecutive weeks of virtual training. Training exhausts me at the best of times, but now, I barely have the spoons left to do more than take a nap in the evenings. We’re not using Zoom, but the sap is the same.

While I’ve been working, Phil’s been woodworking. He made his mom a potato bin, he’s made stools and a bench (the bench was actually stolen and busted up, but I found the wreckage and Phil has now rebuilt it), he made his sister a beautiful table for her patio, a couple of lawn games, another board game (Ur) and a more permanent gate for our door. All of it from old pallet wood. 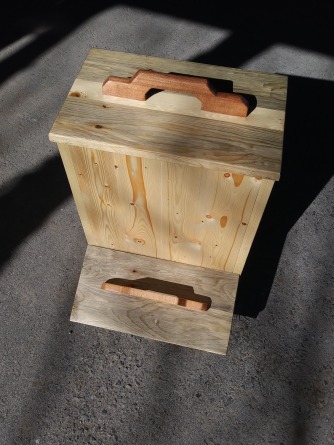 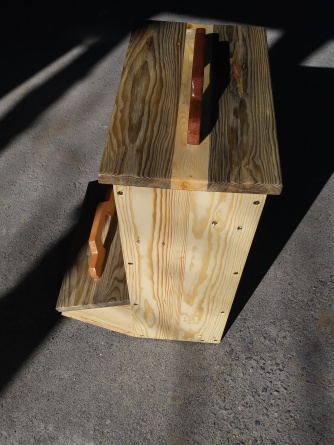 While some services have opened up again, it has been a cautious process. As it should continue to be. Even though we haven’t had a new case identified in Sudbury in a few weeks now, the more people move around, the more likely it is that people will get infected and we’ll have another outbreak.

The earliest we could get Torvi in for a groom is July 27th. I’ll be able to visit my massage therapist again at the end of June. As of the end of this week, in Ontario but outside of Toronto and Hamilton, hair salons will soon be able to reopen (Mom will be happy—her hair is driving her CRAZY) and restaurants with outdoor patios.

From what I understand, I’ll be working from home until there is a vaccine, and possibly even after that. I don’t mind working from home except for the continuing time warp effect. When I’m not training and my time isn’t as rigidly scheduled, I often forget to take my breaks or lunch until my gut reminds me that I haven’t eaten anything in a number of hours.

For now, my employer is keeping 90% of their workforce working from home. Our IT department is still distributing laptops and VPN accounts. They haven’t quite supplied half our workforce yet. I’m not looking forward, honestly. I have a nice set up with my desktop and I will not be happy to lose it.

I had only two writing tasks on my plate this month: trying to finish the rewrite of Reality Bomb and blogging.

I blew both goals away, but … the story of RB is still not finished. I’m continuing to work on it, as I can, and I’ll have to adjust my writing goals for the remainder of the year accordingly. My goal for May was to get to 90k and that meant 4,057 words. I wrote 7,181 words, or 177%, and now, a week into June, I’ve broken 95k. There will be some serious cutting involved in getting this one ready for my critique group. At this rate, I expect it to go over 100k. By how much? Who knows?

Not too damn shabby 🙂

I attended another webinar with Jane Friedman on conquering the dreaded synopsis. I like Jane’s webinars, and whether she’s presenting or hosting the presenter, the content is always very good.

Phil and I also went out to his sister’s for a physically distanced afternoon of testing out his mölkky game and just hanging out.

And, of course, I took lots of lovely pictures on my twice-daily walks with Torvi. 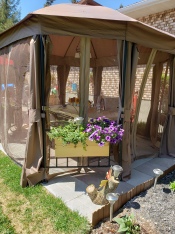 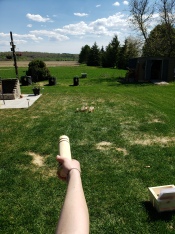 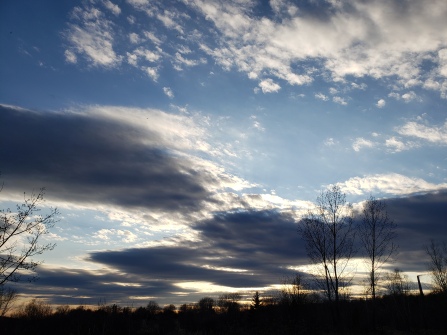 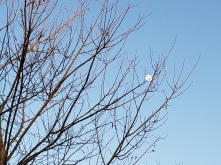 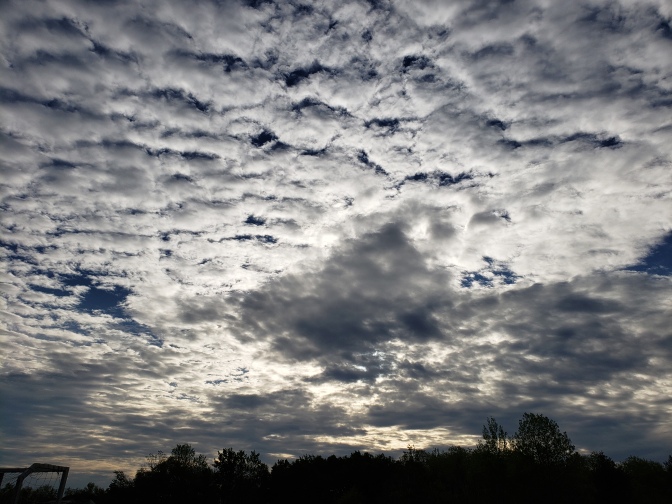 Because if the time of year, a shit-ton of shows had their season finales. To keep this post from getting huge-mongous, I’m going to offer a short summary for each. I know covid-19 had an effect on a number of productions, but I’m not sure which ones.

Grey’s Anatomy—I’m glad Richard’s in recovery, but Meredith’s being pulled into Deluca’s black hole again, and while Link and Amelia seem to be okay, Owen and Teddy are definitely not. Did not like how they got rid of Karev. Bwa-wa.

Nancy Drew (actually ended in April, but I forgot)—I enjoyed this first season, but it just kind of ended/not ended?

Outlander—another great season, though there were definite divergences from the novels (beyond what would be strictly necessary for the change in medium). Glad they ended Bonnet’s subplot early, and sweet, merciful Mary did the final episode put Claire through the wringer.

The Rookie—love Nathan Fillion as I do, and as much as I enjoyed the season overall, the cliff hanger pissed me off. They’ve done this before and have had to dial back in the first episodes of the second season. Nolan is the protagonist, after all. Are they really going to put him in jail? Will tune in but withholding judgement until I see how they resolve this one.

How to Get Away with Murder—the wrap up was precipitous. They basically killed off or ostracized anyone whose story was too inconvenient to resolve within the final episode (Bonnie, Frank, the governor, Michaela).

Bat Woman—I know Alice’s murder of Mouse was supposed to be a touching moment, but it just confirmed for me what a psychopath Alice is … and what a dead-end character Mouse was (I mean, seriously, why?). And the fact that I’m not talking about Kate’s arc should speak volumes on its own.

Supergirl—Brainy’s sacrifice rang hollow. Though I know it was supposed to be this big, angsty moment, it came off meh. And all so that Lex could have his mommy issues.

Charmed—I found the ending puzzling. They seemed to be building up to this big confrontation with Julian, but it never happened?

Westworld—I thought this season was the best yet, though I seem to be in the minority. *shrugs* I love what I love.

Dark Crystal—while I loved it, I think it was my nostalgic memories of the movie that influenced me more than anything else. The series was not without its problems and they all came down to the limits of puppetry in telling what was, ultimately, a battle-heavy story 😦

Killing Eve—mwah! Both Eve and Villanelle are evolving. And that last scene of them facing each other on the bridge? Love.

DC’s Legends of Tomorrow—I was kind of pleased when Sarah became Oracle, but then they undid everything? The resolution was a cheat.

Finally, Phil and I watched the latest season of The Last Kingdom. We abandoned Vikings in favour of this more historically accurate (hey—I said more) series. Uhtred, of course, is completely fictional. The poor guy can’t win for losing, though. He’s lost Aethelflaed to honour and duty as she becomes queen of Mercia, his kids are scattered to the winds, and now, Bebbanburg is further out of his reach than ever. And now he’s charged with the protection of Aethelstan, who will be the first true king of a united England.

Turning to the month in reading, I started off with N.K. Jemisin’s The City We Became. It starts with the novella that was The City Born Great and the diverges into a series of stories about the avatars of all the boroughs. They come together in a fabulous found family, each of them with their own skills and abilities, fighting a Cthulian invader. Some readers found the coming together part a little too slow, but, considering the avatar of each borough is literally bound to their borough, I think it took a realistic amount of time. Loved, but the ending, though it’s what the story demanded, caught me off guard.

Then, I read Starsight, the second novel in Brandon Sanderson’s Skyward series. This novel was very different than Skyward and sends Spensa off on an undercover mission. With the exception of M-Bot and Doomslug, she’s on her own. While the reader gets a little in the way of “meanwhile, back at the ranch” interludes, the characters readers bonded with in the first novel are largely absent. Spensa makes new friends and has new adventures, but even as all her hard work seems to come to naught, Spensa jumps into even more danger.

Next, I read Madeline Miller’s Circe. A lovely reinterpretation of the myth. I really enjoyed it.

I also read Johanna Skibsrud’s Giller-winning novel The Sentimentalists. Actually, I listened to it on Audible and I think the narrator had something to do with my enjoyment, or lack thereof, of the novel. Skibsrud writes in complex sentences with a lot of phrases and parenthetical statements. The narrator paused for every comma appropriately, but it came off sounding very disjointed. The story was good (it won a Giller) but it was difficult to get inside it as an audiobook. It might have been better if I’d read the physical book.

And that, at long last, was the month in this writer’s life.

Until next time, stay safe and be well, be kind, and stay strong. The world needs your stories.