Here we are in the first week of May. It was an interesting and surprising month.

In Canada, and Ontario, specifically, there are indications that the numbers of new cases and deaths are no longer increasing exponentially, but they are still increasing. This is likely due to the number of international travellers over March Break and returning Snow Birds as well as various waves of repatriation.

These returning travellers were all back in March, yes, but I think that because most of those travellers were not equipped to quarantine for two weeks, there was likely some scrambling to shop for supplies before self-isolating, and that unintentional transmission occurred. I’m not pointing fingers. None of us had any idea things would get so bad so quickly. People can contract covid-19 and not be symptomatic. There are reports of people in Italy and Spain being diagnosed almost a month after self-isolating. We live and we learn and we try to do better.

Because they’ve had to, the federal and provincial governments have made public their “plans” for reopening. I have to emphasize that these are plans, and plans that are dependent on widespread testing and infection tracing. Several plans do not contain hard milestones because they can’t. It’s a matter of waiting until the curve is truly planked—and confirmed—and then implementing a cautious reopening of some services and businesses and waiting to see how that affects the rates of infection and death before proceeding.

It’s true that some provinces haven’t been as affected as others and thus may be tempted to rush the reopening process, but the federal government’s message remains, “stay the course.”

I had adjusted my writing goals for Reality Bomb once again because I had almost reached my writing goals but ultimately fallen short of them in the past two months. I had lowered my overall goal to 85k words and am pleased to say that I’ve exceeded that goal this month.

But … the story’s not finished yet. So, I’ve extended the project into May. Technically, I only have 4,057 words left to reach 90k, which was my original goal, but I suspect I’m going to have to overshoot that, possibly by quite a bit, to finish the story properly. Then I’m going to return to the middle section to see what needs to be cut (it is a bit of a sprawl) to bring the overall word count back down to 90k.

I also wrote my next Speculations column and, because it was the creation of an outline using tarot cards, it was another of my huge posts. I wrote 2,112 words of my 1,000-word goal, or 211%.

In addition to my writing, I finally got my poetry collection organized and submitted it to a press. We’ll see where that goes. I also entered several of my poems into a contest. The results should be out May 15, 2020. I’ll let you know if I get good news or bad news.

I heard back from the short story submission. It was rejected, but with a couple of comments. The mystery was solved too easily, which I accept and can work on. The other comment was something I’ve seen many times before, and that was that the story felt more like the basis of a longer work. Sometimes I wonder if I’ll ever effectively conquer short 🙂

I’ll definitely keep trying. In the meantime, my backlog of novel ideas continues to grow.

In non-writing-related happenings, my right eyelid became inflamed. It’s called blepharitis and was probably due to a blocked gland in the eyelid. I had the same thing two years ago. Same treatment. Warm compresses twice a day and antibiotic drops (as a preventative) every four hours for five to seven days.

And then, it appeared that my iPod classic (the kind they don’t make anymore) finally kicked the bucket. I’ve had it for a loooong time and thought that it was due. Basically, it froze (wouldn’t sync with iTunes, change menus, reset to factory settings, or anything) and none of the troubleshooting tips appeared to work. Phil and I were considering buying a new Touch, but lo and behold, I looked over at the shelf where I put the poor, gorked (or so I thought) thing, and it had miraculously reset.

I am now happily listening to my musics again 🙂

In April, I attended a Webinar through the Canadian Authors Association on the publishing process following the completion of a book (fiction or non-fiction). It was called, “The End” is just the beginning.

I also participated in a stress test of Zoom breakout rooms in anticipation of its use for a virtual conference. It was pretty cool. I was shunted in to two or three separate breakout rooms, hung out for a while and chatted, and then the experiment was over. We didn’t break Zoom, as far as I understood, but I think it was a valid trial of the system for the intended purpose. 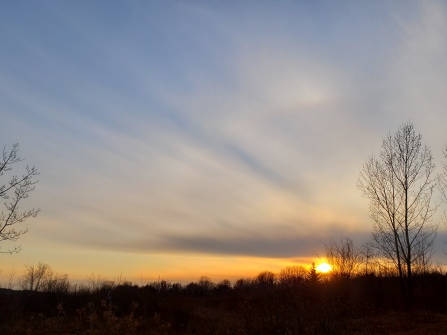 This weekend (May 1-3) was to have been the Ad Astra convention, but it was, of course, cancelled.

Phil and I watched I Am Not Okay with This. The series was short and so were the episodes. One of the people involved in The End of the Fucking World was behind it and the series had the same aesthetic. It had a very retro vibe (the soundtrack dates it in the 80s) but the story felt contemporary.

Syd discovers she has telekinetic abilities even as she discovers her sexual identity. It’s a kind of supernatural weaponizing of a coming out story, kind of like how Ginger Snaps supernaturally weaponized female sexual maturity. The fact that Syd feels she needs to hide who she is and what she can do makes her doubly monstrous. She doesn’t want to hurt anyone, but continually ends up doing the worst possible thing in the moment. It was good, quirky, and horrific in a metaphorical and (fictionally) literal way.

There wasn’t anything new that we were interested in on the immediate horizon, so we turned to catching up on Supernatural. We’d watch up to the end of season 12 on Netflix and then they dropped the series. It moved to Amazon Prime, but we didn’t have the gap to indulge until recently. We watched season 13 and have started 14. I classify it as comfort watching. Supernatural doesn’t demand a lot of the viewer 🙂

We also watched Spiderman, Far from Home. Not as good as Into the Spiderverse, but we enjoyed it. Tom Holland is the best Spiderman yet.

In my personal viewing, I finished up the latest season of Frontier, Jason Momoa’s passion project about the genesis of the Northwest Company. They did some necessary hand waving at the travel times for story reasons (they couldn’t dedicate realistic screen time to the ocean journeys), but the story was interesting.

In terms of reading, I read the next two books in Sabaa Tahir’s series, A Torch in the Night and A Reaper at the Gates. The story is good. I liked how the three main characters each develop in their own ways. It’s the continuing relationship drama that frustrates me as a reader.

I also read Alex Bledsoe’s The Hum and the Shiver. SPOILER WARNING I quite liked the displaced Tuatha de Danann, living in seclusion in America. Good plot, humorous secondary stories, and a damaged and compelling protagonist.

Autonomous by Annalee Newitz was thought provoking. Newitz comes at the topic of slavery from multiple perspectives. The protagonist, Jack, is a slave to her past. Threezed, is a human slave. Paladin is a robot with a human (cadaver) brain that aids in facial recognition. Most bots are created indentured but can earn their autonomy through service. Med is a bot created free, educated, and with a stable career. Elias, the human antagonist and Paladin’s partner is a slave to his preconceived notions of free will, consent, and sexual identity.

Throw all of these characters into a mixing pot of big pharma, piracy, a drug that enslaves people by addicting them to their jobs, free labs that attempt to make life-saving pharmaceuticals available to everyone, and the security agency tasked to police it all and you have a SF thriller that never stops and never stops making you think.

Finally, Brandon Sanderson’s Skyward was surprising. I’ve read quite a few of Sanderson’s novels. I really liked the Mistborn series. I enjoyed the Legion novellas, Steelheart, and The Way of Kings. Warbreaker was good, too. But Skyward kept me reading in a way his other novels haven’t. I was really invested in Spensa’s journey. The theme was simple: what does it mean to be a coward or to be brave? Spensa’s father was a pilot—a great one—but in one of the greatest battles in her people’s history, he’s said to have run from the fight. Spensa grows up under the burden of that legacy, but still wishes to be a pilot despite it. Frustrated at almost every turn, Spensa has to come to terms with what her father did, her true legacy, and she has to decide who she really is.

And that was April in this writer’s life.

Until Tipsday, be well and keep safe, be kind, and stay strong. The world still needs your stories.