This past week, I spent most of it out of town at a learning event for work. I carpooled with three of my colleagues, none of whom drive. The rental agency gave me a Ford Expedition, which I appreciated on the winter highways, but not so much in the parking garages of North York and Richmond Hill.

The hotel we stayed at was driving distance and we had to find parking at the office every morning. The mornings weren’t so bad. It was travelling down Tuesday and trying to find parking around noon that was the challenge. I levelled up my large vehicle driving skills, though.

And, as I mentioned last week, I had a cold the whole time. Being sick away is exhausting. I still have the dregs, but I’m in recovery.

Phil was not so lucky. I shared my illen with him prior to my departure and, as he texted me on Tuesday, “the man cold dialled up to eleven.” He’s still quite sick, but he’s determined to go back to work tomorrow because of the difficulties I’ve mentioned in past posts.

Torvi was quite good for him through the week but, because he was sick, Phil shipped her over to my mom’s most days, so he could stay in bed. Torvi destroyed Mom’s welcome mat, two hats, and she’s had to move the hall tree (an antique) into the basement and close the door. Torvi was jumping on it and threatened to tip it over.

Once Torvi is spayed and has her final vaccines, I’m definitely investing in obedience training.

While I was down south, because I was sick and on call for driving duties, I didn’t really have a lot of time to devote to creativity. I generally tackled essential duties, like curation, and went to bed early.

I let things slide Friday night after my return and caught up yesterday, though I was obliged to have not one, but two, naps yesterday. I should be fit to return to work tomorrow as well, though.

I did write a little bit in the last week, however. Sunday and Monday nights, I was able to commit a few words to Playing with Fire, and on Thursday night, I wrote a few more. Yay me 🙂

I suppose I could have extended the metaphor to saddling the horse and tightening the girth, but the horse has been saddled and waiting for me since I started to think about PwF again. I think I’ll leave the equine metaphor there for now.

This morning we lost an hour. Daylight savings time is another challenging time of year for me. It usually takes me a week to properly adjust my sleeping and waking habits. I’m hoping my naps yesterday helped. We are creeping closer to the vernal equinox, though, and spring. It’s lighter in the mornings and the quality of the light is changing as the earth shifts on its seasonal axis. My mood is improving.

I also have my follow up appointment with my gynecologist for the ablation this week. So far, I have experienced two very light periods and I have stopped discharging in between. I’m seeing it as a good sign and have stopped taking my iron supplements. I’m going to let my body adjust to its new normal and hope that I don’t get anemic again. The blood tests will tell the tale, though.

I’ve also lost about twenty pounds since last fall. It’s mostly been due to Torvi and my increased level of activity from walking, caring, and playing with her. I weighed the Torvi-beast this morning, BTW … She’s 48 pounds (!)

I have hope that this cold was just a stress thing and that my recovery heralds an overall improvement in my health. There’s still Phil’s uncertain work situation and my ongoing pay difficulties that have to be overcome. Those were the stressors that helped to make both of us vulnerable and until we both have solutions in place, I anticipate that we will continue to face a few challenges.

My critique group has, after a delay due to various members moving and adjusting to life in new time zones, started up. This is another good thing. 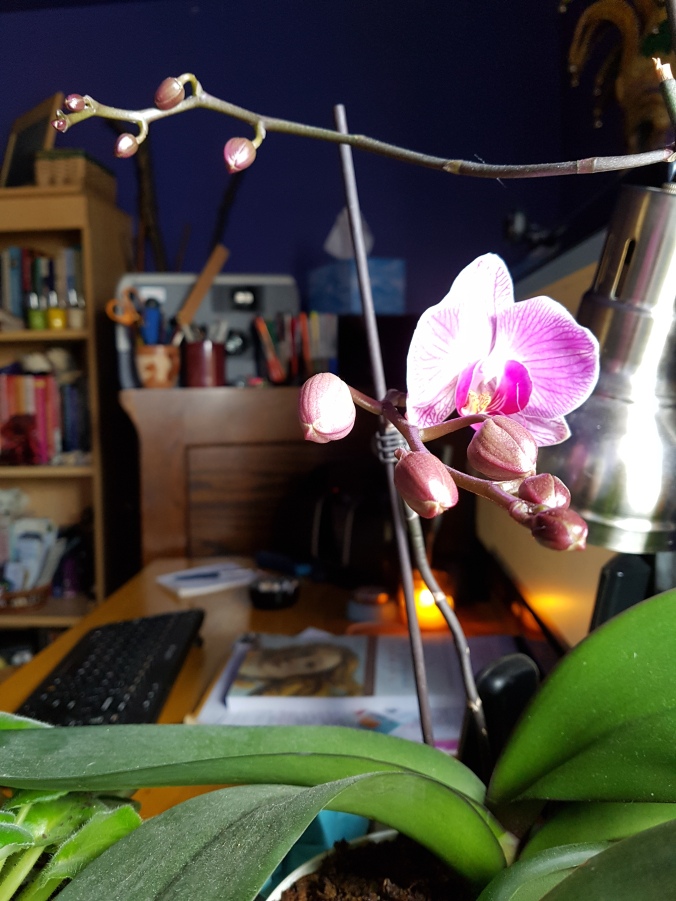 And … my orchids are in flowering mode again!

I’m going to be taking some time in the next week to try to refocus and organize my life again. I have been in denial that I could take on pup parenthood and that I could still devote the same kind of time to everything else in my life.

As I’ve mentioned in past posts, something’s gotta give. I don’t want that something to be my writing anymore and it can’t be Phil, Torvi, or the rest of my family. Fiscal necessity means it can’t be the day job, at least not in the short term.

What does that leave? That’s where things get interesting and that’s where my efforts will focus for the foreseeable.

All these things are first world problems, though. That is to say, they’re not really weighty problems in the bigger scheme of things. I have to keep things in perspective and hope I’m not whinging too much.

Until the next time I blog, be well, be kind, and stay strong. The world needs your stories.