Disclaimer: I am not perfect and neither are my notes. If you notice anything that requires clarification or correction, please email me at melanie (dot) marttila (at) gmail (dot) com and I will fix things post-hasty. 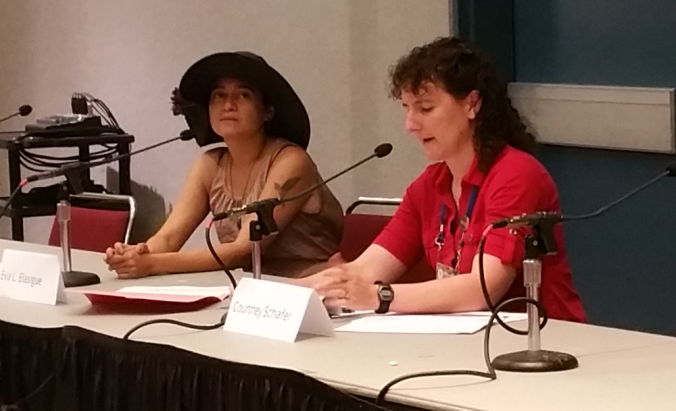 CS: Kepler discovers exoplanets by observing the subtle signs of a planet passing in front of its star. It’s focused on a small area and it’s only covered 3% of that space in detail so far. The number of exoplanets discovered is large, but only a fraction of circum-binary systems have planets that might be habitable. The planets discovered in those systems are massive, though. It’s exciting that so many planets have been discovered.

EE: One of Larry Niven’s conjectures is that a planet in a binary system would have an off-center core.

CS: It’s possible that a planet in a binary system could have a figure eight orbit. It could also be more easily ejected from the system. Since circum-binary systems are fairly common, there might be a large number of rogue planets out there. To discover the composition of a planet, you need to use spectroscopy.

Q: Is there publicly accessible software for fact-checking the plausibility of an invented system?

A: There are solar system simulators.

CS: You can also check with your local amateur astronomy club.

Q: Is Alpha Centauri A, Rigil Kentaurus, a binary star?

CS: That’s the current understanding. One thing to keep in mind is the force that would be exerted on planets in these systems. If we look at the moons of Jupiter, they need to have their own magnetospheres to maintain an atmosphere. Otherwise, Jupiter strips it away.

EE: You should check out Galaxy Zoo. It’s a citizen science initiative.

[At this point, the ideas starting coming fast and furious. To be honest, I’m not sure who said what.]

The most favorable binary systems for planets are those in which both stars are around 80% of the sun’s size. They’re also fairly close to each other. The minimum stable radius for a planet in a binary system is 2-4 times larger than [… sorry didn’t catch this. I think it’s Jupiter. Wikipedia indicates this would be correct. If the planet is a gas giant, it may not support life, but its moons might. Smaller stars would accommodate smaller planets, but the planets may not be habitable, depending on their orbits and the relative light and heat they receive from their suns.]

They probably didn’t form in their current orbit. There’s an instability in binary systems which could result in the planet spiralling into one of the stars, or being flung out of the system. Planets in binary systems would move around unless they could find a stable orbit.

There are also mismatched binary systems. A blue giant with a red dwarf, for example, or a sun-type star with a black hole.

For more information: If you Google the term circum-binary systems, you will find a lot. Navigate to dependable sources, like NASA, or Space.com (unlike yours truly). Or head for fun but dependable sites like Phil Plait’s Bad Astronomy column, currently hosted by Blastr.

Until next I blog, be well, be kind, and stay strong.