Here is the QotW:

Throughout the book, there are visual techniques, diagrams, and exercises to help your writing. These include story-mapping, the revision pyramid, the character compass, and so forth. This week, I want you to choose a technique that is new to you and try it out. Then report back and tell us how it went.

The technique I’ve chosen is TADA.

This is an acronym Gabriela created to assess character. The letters stand for Thoughts, Action, Dialogue, and Appearance.

The idea is that the writer wants to achieve a balance between all four aspects of character, and between characters, in each story. This could even be applied on a scene by scene basis.

So you can look at your characters individually, in scenes, in conjunction with one another, and overall in the story to ensure you’re keeping all of these character elements in the ratios you want.

To visualize this, Gabriela provided a graph, which she calls the character compass. It’s a circle with the letters T, A, D, and A distributed over the cardinal directions. Lines divide the circle into four with Thought and Dialogue, and Action and Appearance, in opposition to each other. 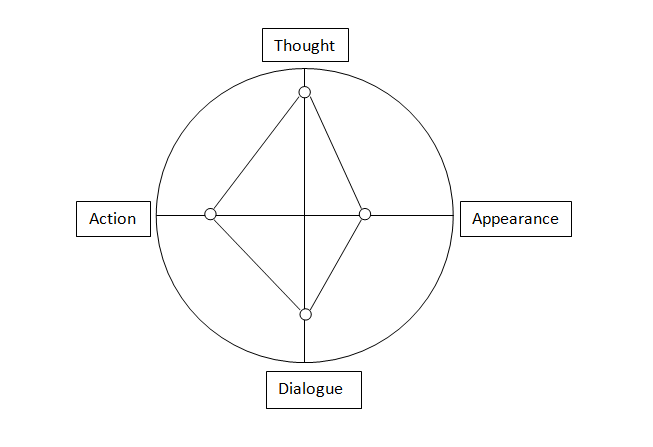 I’ve done my best to create a facsimile with Word’s drawing tools, print screen, and The Gimp 🙂

In this particular compass, I’m looking at one character, Ferathainn, in general.

She’s my protagonist and her POV is first person, past tense. There’s a lot of thought and internal monologue with Fer.

She’s studying to become a mage, but at the beginning of the novel, it’s all been theoretical. Her studies have prevented her from maintaining friendships, and so she lives in her head a lot. Part of her studies include rhetoric. Intonation and presentation can affect certain types of magick.

Fer’s been allowed (yes, allowed, it’s a plot thing) to study with her father, who is a bard, and her betrothed, who is an eleph finiris, or songmaster, because magick can be sung. She’s extended this part of her training to include dance, because she’s realized she needs a physical outlet after all this theory and rote memorization.

One of her small rebellions is that she also trains with her best friend, the forester, who teaches her how to fight. Primarily unarmed combat and survival skills.

So Fer is a heavily thinky character, with a good side order of dialogue and action. She doesn’t often consider her appearance, however. There aren’t a lot of mirrors in her little village. It’s not something she’s ever placed a lot of value on.

So I have to be careful when I write a scene about Fer alone, because she’s lopsided.

When she interacts with other characters, it’s primarily through dialogue and action, but I have to pay attention to their reactions to her physically. It’s actually very good for the show versus tell thing.

For example, Fer’s mother has to reach up to hug her, because Fer is tall. She’s of a height with her father, though. Through little interactions like this, readers form a picture of Fer in their minds over time.

When I switch POV to the other characters, they get to describe Fer, but I try not to have them do the ‘classical’ romantic inventory.

In early romances, which were often more adventure tales than what we think of as romances, when the hero meets the love interest for the first time, he waxes poetic and describes her from head to toe. Bad thing to do in a modern novel, though.

When Eoghan first ‘meets’ Fer, she’s all but dead. Having tried and failed to save victims of the war in the wake of the army’s passing, Eoghan decides he’s going to make his stand. He’s going to save this raggedy girl if it’s the last thing he does. Her appearance, other than the severity of her wounds, is secondary to his efforts.

When Dairragh first sees Fer, it’s from a distance, and it’s what she’s doing—performing magick—that makes its biggest impression on him. Dairragh hates all magi with a passion for the sake of the mage who murdered his parents and destroyed his home, including the people and gryphons that were his charge to protect.

So, of course, he hates Fer on sight and his prejudice colours his every interaction with her. At least initially.

The way I see it, readers are going to form an image of Fer in their heads that’s probably nothing like the way I see her. And that’s okay. They get ownership of my characters and my story on a reader by reader basis.

That’s what I want.

Gabriela’s TADA acronym and character compass are going to be one tool I take from the DIYMFA book and incorporate into my writing process.

Since I’m a plantser (part plotter, part pantser) I tend to pants my way through the first draft, but in revision, I can see the character compass being a very useful tool to evaluate how balanced my characters are in any given scene.

I hope I’ve given you enough of a run down that you might be able to make use of this technique yourself. Of course, you could always go buy Gabriela’s DIYMFA book and get a more detailed explanation of TADA and the character compass. The official release date was yesterday.