I actually started reading this novel in parts, as it came out earlier this year, before I received the advanced reader copy (ARC) of The Occassional Diamond Thief this past fall. The ARC took precedence, however, and as I generally don’t review anything I haven’t finished and enjoyed, this review had to wait a bit.

Yes, this is another bit of catch up 😉 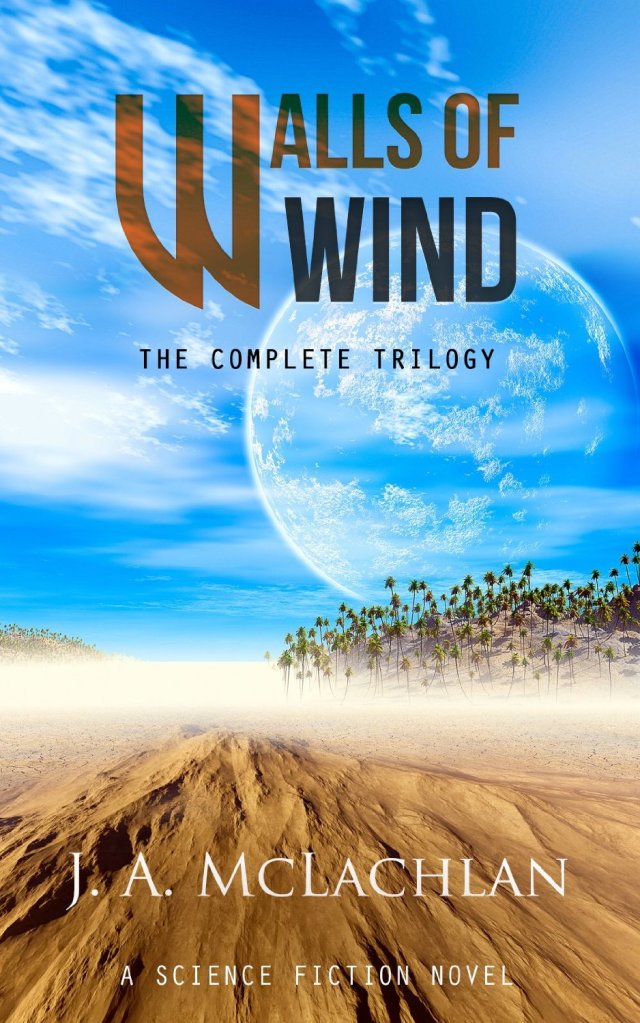 What if males and females were completely different species from each other?
WALLS OF WIND explores this question and its ramifications on a world in which males and females are two equally intelligent sentient species: Ghen and Bria. They are interdependent and reproductively symbiotic, although physically, emotionally and mentally they have little in common. Or so they believe, until their city-state is threatened by increasing internal conflict and a terrifying external predator that has invaded the forests just beyond their walls. A handful of Ghen and Bria struggle desperately to find a solution before their civilization is destroyed.

WALLS OF WIND combines anthropological speculation with the tragedy, suspense and triumph of individual characters who struggle to overcome external threats as well as their own internal fears and prejudices.

When I started reading The Walls of Wind, I was immediately reminded of Ursula K. Le Guin’s Left Hand of Darkness, which presented an alien race with distinct gender and reproductive attributes.

McLachlan goes further, technically eliminating gender, but biologically linking two species. The unique circumstances of this biology define McLachlan’s world of Wind and form the heart of her story.

Bria and Ghen are very different, and very aware of their differences. One of the walls on Wind that must be broken down is the prejudice that exists between these two quintessentially linked species.

This is where McLachlan’s novel became reminiscent of Sherri S. Tepper for me. Tepper often explores the stratification of human society as it encounters alien worlds and species, or the post-apocalyptic changes that humanity undergoes, usually in terms of divisions along gender lines.

The dynamics between the Bria and the Ghen struck me as similar, but because the two species are effectively gender neutral, McLachlan is able to offer the reader a fresh perspective on the old challenges of equality and compassion.

A terrible secret is another of the walls of Wind that must first be revealed, and then addressed by the Bria and Ghen who have conspired—for the betterment of their peoples—to keep it hidden for generations.

There are love stories that play out through the novel, the generational stories of several families, transgressive acts by various characters that challenged species roles and capabilities, scientific discoveries, and adventures.

At every turn, the centre around which McLachlan’s story turns is the encounter with the other, whether between Bria and Ghen, Ghen and the fearsome Broghen, or Bria and Ghen society and the unknown communities of Bria and Ghen discovered elsewhere on Wind.

There is something for every reader in these pages. The novel is tremendously rewarding, and though tragic, ultimately hopeful.

J.A. McLachlan was born in Toronto, Canada. She is the author of a short story collection, CONNECTIONS, published by Pandora Press and two College textbooks on Professional Ethics, published by Pearson-Prentice Hall. But science fiction is her first love, a genre she has been reading all her life, and The Walls of Wind is her first published Science Fiction novel. She is represented by Carrie Pestritto at Prospect Agency.

Robert J. Sawyer reviewed The Walls of Wind and had this to say:
“Look out, C. J. Cherryh! Step aside, Hal Clement! There’s a new master of truly alien SF, and her name is J.A. McLachlan. THE WALLS OF WIND is doubtless THE debut novel of the year.”
— Robert J. Sawyer, Hugo Award-winning science fiction author

You can learn more about J.A. McLachlan and her books on her website at: http://www.janeannmclachlan.com