The last time I offered a pupdate, Nuala had been diagnosed with diabetes, we had a VetPen, but were having difficulty regulating her blood sugar. We’d also stopped the prednisone and started an alternate treatment, cyclosporin.

Well, after three glucose curves, her blood sugar is still not regulated, but the vet feels that clinically, she’s doing fine. The stress of a day-long stay at the vet’s may have an impact on her glucose readings, however. So we’re continuing her treatment of 16 units of insulin twice a day.

We ended up returning the VetPen as the maximum dose on it is 16 units and we may have to increase her dosage again, depending on how her symptoms are managed. Phil and I are much more comfortable with syringes anyway, having had previous experience with our cat, Thufir (the caturday quickie mascot).

The cyclosporin was not working and her ears (which the pred and the cyclosporin were prescribed to treat) were once again full of cysts. She had an abscess in one ear, as evidenced by the amount of pus that came out of it, and so the vet has recommended a return to the pred. We have to monitor her water intake and urination and may have to adjust her insulin accordingly . . . because . . .

Nu is once more a piddle pup, incontinence being one of several side effects of the pred. We now have washable incontinence pads made for humans on the bed and the couch, and are otherwise tolerating the occasional dribble. She can’t help it, poor dear.

That’s our complex pup in a nutshell.

After only a few days on the pred, her ear cysts are shrinking again, and she seems quite happy.

This is seriously the best picture I could get of her. She’s absurdly camera shy (!)

Our aim is quality of life. She’s nine and a half, even though we still refer to her as the pup.

I hope this will be the last pupdate for a while.

So . . . when last I wrote about this, Phil and I were optimistic about getting the work on our yard and driveway done. It was October and the road work was to continue until November 15th. We had the beginnings of the retaining wall, and a promise from the city engineer that everything should be completed.

Then it snowed October 31st. 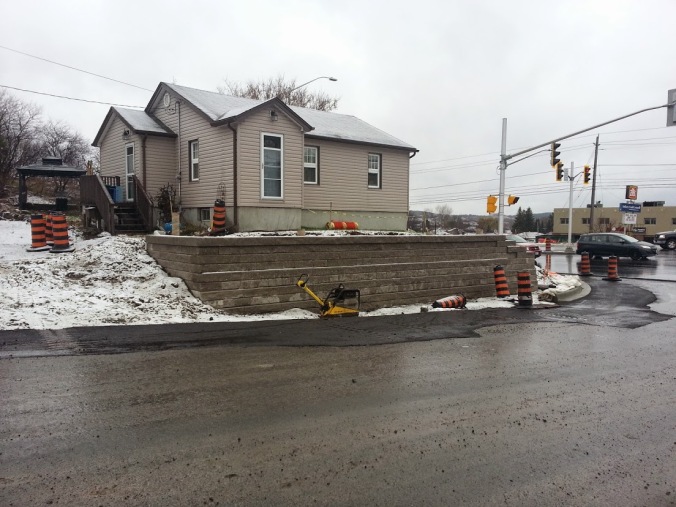 What will be done in the spring (otherwise, Phil and I might not be as understanding as we have been):

We’re waiting to hear from the engineer about something we’d like to have added to the work order (and which we will pay for because it’s on our property). Since the driveway is all gravel anyway, we’d like to get a contractor to replace the sewer line. We have roots in the line and think it would be a convenient time to get the work done, rather than pay to have the drive dug up, the line replaced, and the drive repaved at a later date.

So that’s where we are.

Will let you know what happens when work resumes in the spring.