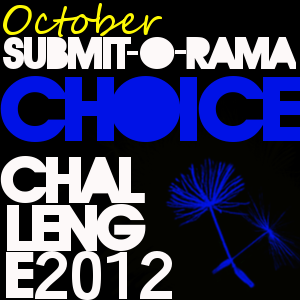 In the lovely Khara’s own words:

There are five unique challenges for you to choose from to participate in the Submit-O-Rama! Click on the links below to pick your flavor of the month!

Of course, you know I went for the “choose your own rules” challenge.  I’m going for one submission per week and I’ve just made my first one: a short story to Tesseracts 17.  The deadline’s not until February 2013, but I wanted to get this submission done early.  this will be my fourth try at a Tesseracts anthology, and last year I received a very encouraging (not being sarcastic) rejection letter from Mark Leslie, who I got to meet in person this past week (more on that to come).

It’s not too late if you want to join in the fun.  Just go to Khara’s blog, Our Lost Jungle, click on the Submit-o-rama page, and follow the destructions from there.  She has forums set up too.  You can also join Khara’s Facebook event page for ongoing updates from the participants.

Some of them are going for the gusto.  Join in on the fun!

In fact, if you look at my blog now, you might notice that there’s no blogging schedule in evidence.  I’m going to be posting as I can and as I have things to blog about.  This may mean a blog or more in a day and it might mean days or weeks when I don’t blog at all.  I’ve decided that I’m good with that.  I’m hoping that you will be too.

Right now, I have to work on my novel, and I’m trying to restructure and simplify my life so that I can do that.

Having said that, I’m going to be blogging on a fairly regular basis for the next couple of weeks.

From the learning mutt side of my brain will be:

As you can see, there will be lots of Writerly Goodness to come.

Something apropos of nothing

As the sun rises later each morning and until the snow falls, I’m faced with a dog-walking conundrum.  If Nuala (das pooch) chooses to unburden herself on a lawn that is not flooded by streetlight, how does a proper pup-mom find, let alone extract the odious package?

I was thinking of that semi-annual problem on Friday morning and reminded of a friend, Stacey, who has moved to the States.  When she lived in Sudbury, we walked our dogs together, and discussed this very issue.

Though she was devoted to cancer research, and still is, we both thought that it would be great if some enterprising researcher were to invent some kind of additive (innert and harmless to the animal) that when added to a dog’s food would make their feces phosphoresce to aid in the timely and efficient removal of such materials incumbent upon all responsible dog owners.

Any keen researchers interested in taking up the challenge?  I’m just sayin’ …

The randomness of Writerly Goodness is heading off to watch Ghost Rider: Spirit of Vengeance.

Good words at ya, my friends.

Please note: this post originally appeared as a guest post on John Rice’s Keeper of the Sword blog on October 3, 2012.

It was a grey autumn day when I set off for North Bay.  Then I picked up Kim Fahner, and the journey became a poetic road trip of epic proportions 🙂  Talked craft, poetry, fiction, blogging, social media, and Doctor Who!

Kim brought me back a gift from her recent trip to Ireland: Leanne O’Sullivan’s Cailleach: The Hag of Beara.  Lovely book.  Saving it for the weekend 🙂

The drive was blessedly uneventful and we arrived early enough to have lunch before the event started.

On the way back to the park for the reading, we were greeted by Father Forrest.  The White Water Gallery’s Youth Arts Initiative created puppets this summer.

Father Forrest was one of them and he stopped by the reading later on in the afternoon.

We walked on to the park where the poets and audience were already gathered.

Though the organizers, Kevin smith and Natalie Wilson had brought a PA system there wasn’t an outlet to power it.

Still, Kevin introduced the event and got underway promptly, explaining a little of the background of 100 Thousand Poets for Change.

100 Thousand Poets for Change was initially conceived by Michael Rothenberg and Terri Carrion in March, 2011, as a worldwide set of events to take place simultaneously on September 24, 2011. Literary event organizers volunteered to host associated events in their own cities or schools. ~Wikipedia

The first reader of the North Bay event was Laurie Kruk, professor at Nipissing University and author of Theories of the World, Loving the Alien, and the soon to be released, My Mother Never Told Stories.

She read several selections from her new book of poetry.

I was the next poet to read and only chose a couple of poems: “Manitou Sky” and

I started my set with a post on Jezebel regarding a Sikh woman and her response to what seemed a malicious picture posted as a critique on her appearance.  It was my way of commenting on how social media can be an avenue for positive change.

I finished my reading by offering some advice from Kristen Lamb in this season of political frenzy on how writers really change the world.

Following my set was Tim Robertson, poet and aphorist, that is, writer of aphorisms.

He started the session with a series of witticisms and then read a couple of his longer poems.

After Tim’s reading was a brief intermission where poets mingled and chatted.  I took a few moments to reacquaint myself with Natalie, with whom I’d contributed to NEOVerse, and Laurie, with whom I’d read on several occasions during my more active poet years.

The second half of the afternoon session began with Christine Charette, artist and poet.  Father Forrest visited at this point and remained around for her set.

Christine’s poetry has as its heart the issues of womanhood and motherhood and it did speak to the theme of change.

and published poetry in print and online.  Denis’s poetry was definitely the poetry of Northern Ontario, evocative of its sights and sounds in the context of family and change.

Then Doyali Farah Islam took the stage, er, cobblestones 🙂  She published her first book of poetry, Yusuf and the Lotus Flower, in October of 2011.

Doyali is definitely influenced by Rumi, and her poetry brought a bit of the sacred to the assembly.

The last poet of the afternoon session was my friend, Kim Fahner,

English teacher, and author of You must imagine the cold here and Braille on water.  Her new book of poetry, The Narcoleptic Madonna is due out this fall.

Kim is a great reader who interacts with her audience with humour and self-conscious grace.  Kim read from her new work.

Afterward, the poets mingled again.  Business cards and books were exchanged.  Though there was an evening session where Ken Stange, Kevin, and Natalie would be reading, Kim and I had to toddle off.  Nonetheless, I understand the evening reading at the Cornerstone Cafe was a great one, and the North Bay edition of the 100 thousand poets for change event a success.

And then, after a fortifying pumpkin spice chai latte at Twiggs, we were on the road again, chatting more about the day, poetry, creativity, and again, the fabulous Dr. who 🙂  David Tennant is one of Kim’s secret husbands, don’t you know.

The day ended with a lovely supper at Verdiccio’s where I had the chance to use the coupon I’d won on Facebook this summer.

All was ‘write’ with the world 🙂